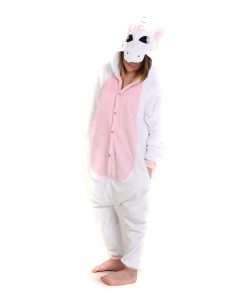 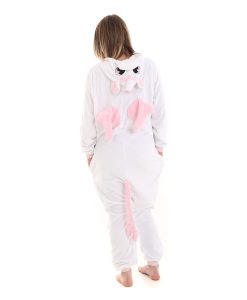 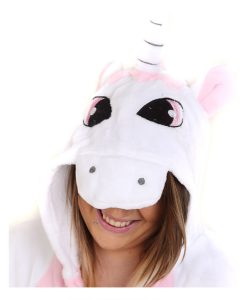 Our Pink Unicorn Animal Onesie is rare and magical and well…..pink. Big round friendly eyes and a horned head, it also has a soft pink mane, tiny wings and a matching tail. The polyester fleece fabric is lightweight, incredibly soft, warm and machine washable. Ankles and wrists are elasticated to help adjust sizing and there are handy side pockets. Like all our funzee products, this funzoo unicorn onesie is warm and comfy and can be used as pyjamas, loungewear, or for special occasions. Animal suits make people laugh and get you noticed so are great for charity fundraisers, festivals and corporate events. Order now and we will dispatch quickly from our UK warehouse using Royal Mail.

Sizing is easy. We have 2 sizes and to choose the right one just base it on the height of the wearer.
Choose Medium for height 5ft 2 – 5ft 7.
Choose Large for height 5ft 8 to 6ft 1
SKU: N/A Category: Funzoo Animal Onesies Tags: Animal Costume, Animal Onesie
Categories

Ever looked for a Unicorn, ever thought I wish I had a Pink Unicorn Animal Onesie? Well now you can because we have created a Unicorn Onesie in both pink and blue. This is made from soft, warm fleece. At the back are cute little wings and a tail while the head has big soft eyes, little ears and a single horn or Uni Horn. The Unicorn has been described throughout history and in folklore is believed to have many magical properties including healing the sick. The Unicorn may have been confused with other animals, for example Marco Polo seems to have described a Rhino when referring to Unicorns. The unicorn is famously symbolised on the Royal arms of Scotland. It was chosen because it was seen as the unstoppable force of wild nature which would rather die than be captured, just as Scots would fight to remain sovereign and unconquered by the English. Not many people know that the last Unicorn in Europe was was shot near Inverness in 1707. But now you have the chance to own a Pink Unicorn Animal Onesie. It comes in two sizes so choose depending on your height. We will deliver fast from our UK warehouse so in just a few days you could be curled up in matching his n hers Unicorn onesies.