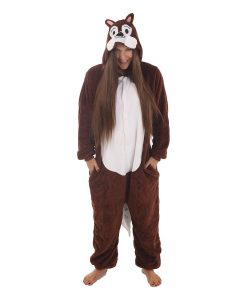 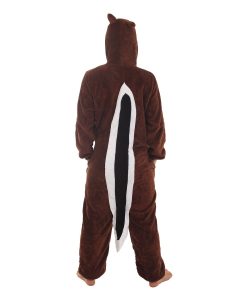 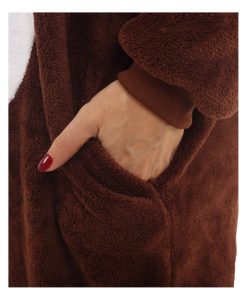 Small striped rodent anyone? This is a cuddly brown and white one piece suit with black and white stripe at the back and a cute little face. The fleece fabric is lightweight, soft, very warm and machine washable. Like all our funzee products, these funzoo animal onesie costumes are warm and comfy and can be used as pyjamas, loungewear, or for parties and special occasions. Animal suits make people laugh and get you noticed so are great for charity fundraisers, and will help you break the ice at parties.

Sizing is easy. We have 2 sizes and to choose the right one just base it on the height of the wearer.
Choose Medium for height 5ft 2 – 5ft 7.
Choose Large for height 5ft 8 to 6ft 1
SKU: N/A Category: Funzoo Animal Onesies Tags: Animal Costume, Animal Onesie
Categories

Our Chipmunk Animal Onesie is a little cutie. But why do we call a small North American rodent a Chipmunk? Is it because they live in a monastery and like fried potatoes? According to wiki, the common name originally may have been spelled “chitmunk,” from the native Ottawa word jidmoonh, meaning “red squirrel”. The earliest form cited in the Oxford English Dictionary (from 1842) is “chipmonk,” however, “chipmunk” appears in several books from the 1820s and 1830s. Other early forms include “chipmuck” and “chipminck,” and in the 1830s they were also referred to as “chip squirrels;” probably in reference to the sound they make.  Chipmunks have also been referred to as “striped squirrels,” “chippers,” “munks,” “timber tigers,” and “ground squirrels”. So to cut to the chase, no one seems to know.

Maybe you are a fan (probably the only one) of the movie Alvin and the Chipmunks, or the second movie Alvin and the Chipmunks: The Squeakquel. Anyway, we know that many of you love our chipmunk animal onesie. Its fun for lounging around, can be used as pyjamas or nightwear, but also makes an amusing costume for parties and Halloween. Its made from warm, soft coral fleece and includes a striped tail at the back. Order now and we will despatch quickly to you from our UK warehouse using the reliability of Royal Mail Recorded as standard. Chipmunk Animal Onesie is just part of our Funzoo range. If you want a different animal costume let us know and maybe we can get them made for you. Funzee bring you the best quality products at the best online prices.